Sorry, you need to enable JavaScript to visit this website.

Sustainability is at the Heart of Starbucks Coffee Sourcing

In Indonesia, in North Sumatra, where the temperature routinely hovers in the 70s and low 80s, the rain falls reliably and the half-days of sun bake the earth at the 4,000-foot-plus elevation, Wahana Estate occupies a sweet spot for coffee cultivation: coffee cherries, the deep red fruit that clusters along the branches of coffee trees, are harvested year-round.

The beans are so distinctive that many of them are funneled into the Starbucks Reserve program, the company’s premium coffee line. But just because coffee-growing conditions are favorable today doesn’t mean that will always be the case or that farmers are necessarily experts in growing coffee either sustainably or ethically. That’s where Starbucks steps in, laying out guidelines for growing, processing, quality and sourcing that ensure each cup meets Coffee and Farmer Equity (C.A.F.E.) Practices.

Developed in collaboration with Conservation International, a nonprofit committed to environmental protection, C.A.F.E. Practices launched in 2004 as a comprehensive set of social, economic, environmental and quality guidelines that dictate how coffee should be ethically sourced. The guidelines help Starbucks evaluate supply chains — which can consist of hundreds or even thousands of farmers—to determine which ones produce the highest quality and most socially and environmentally responsible coffee. A network of third parties independently evaluates performance.

“C.A.F.E. Practices is, we believe, the right way to grow coffee,” said Kelly Goodejohn, director for Starbucks’ ethical sourcing programs. “Ultimately for the consumer, this translates into the finest cup of coffee that also supports farmers.”

About 125 million people earn their livelihood by growing or trading coffee. In 2016, Starbucks purchased more than 600 million pounds of green Arabica coffee, 99% of which obtained the C.A.F.E. practices seal of approval.

Among them are beans from Wahana Estate, which was started by Dianto Gho’s parents in 2005. Wahana’s 175 farmers grow sweet potatoes, green beans and radishes, but more than half of the 1,126 acres are devoted to coffee. Gho, who as the farm’s sales director manages Wahana’s sustainability program, says that C.A.F.E. Practices standards are rigorous but worthwhile. “C.A.F.E. Practices are a lot of work, but they improve quality and help farmers be better at what they do,” said Gho, who implements the guidelines at Wahana and welcomes external groups of farmers to the estate, where they learn about the verification process and sustainable farming.

Social, Economic and Environmental Responsibility Are the Pillars

Farm workers are the focus of the first category, which examines wages, benefits, medical care, education for resident and migrant workers’ children and living conditions to make sure they conform with national laws and international conventions. There is a zero tolerance policy for child labor, for example. 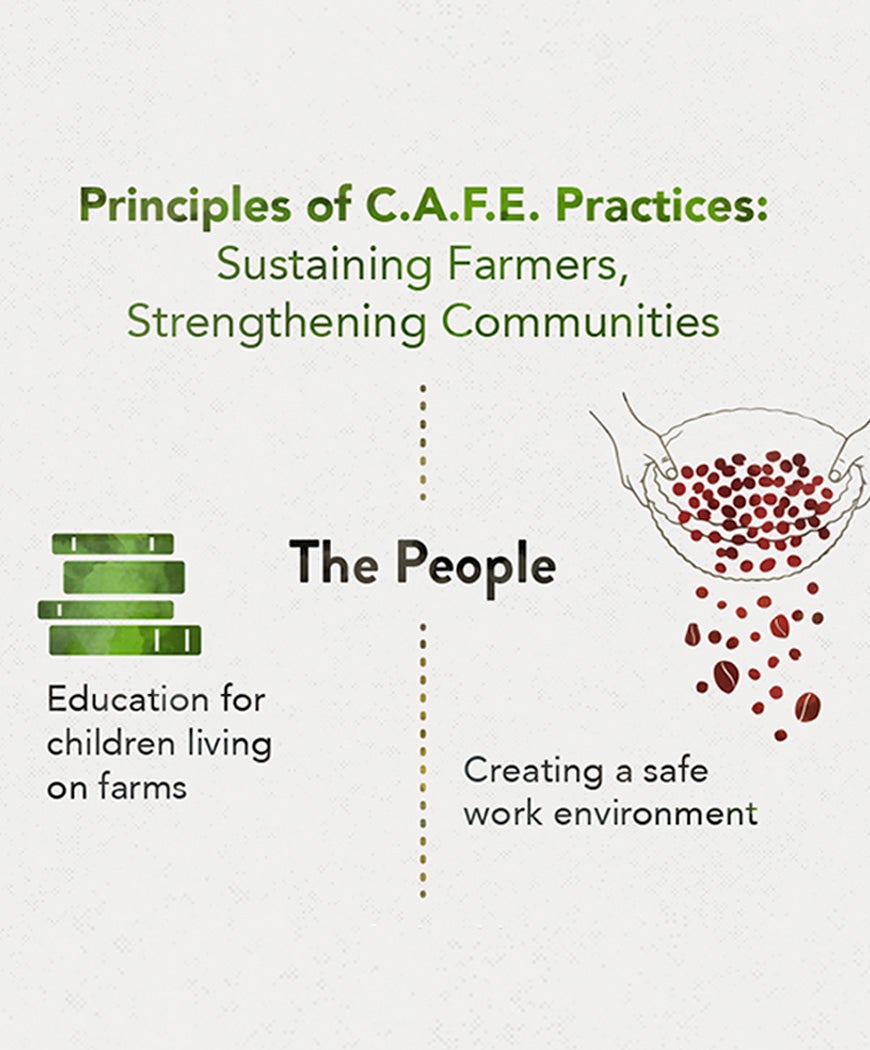 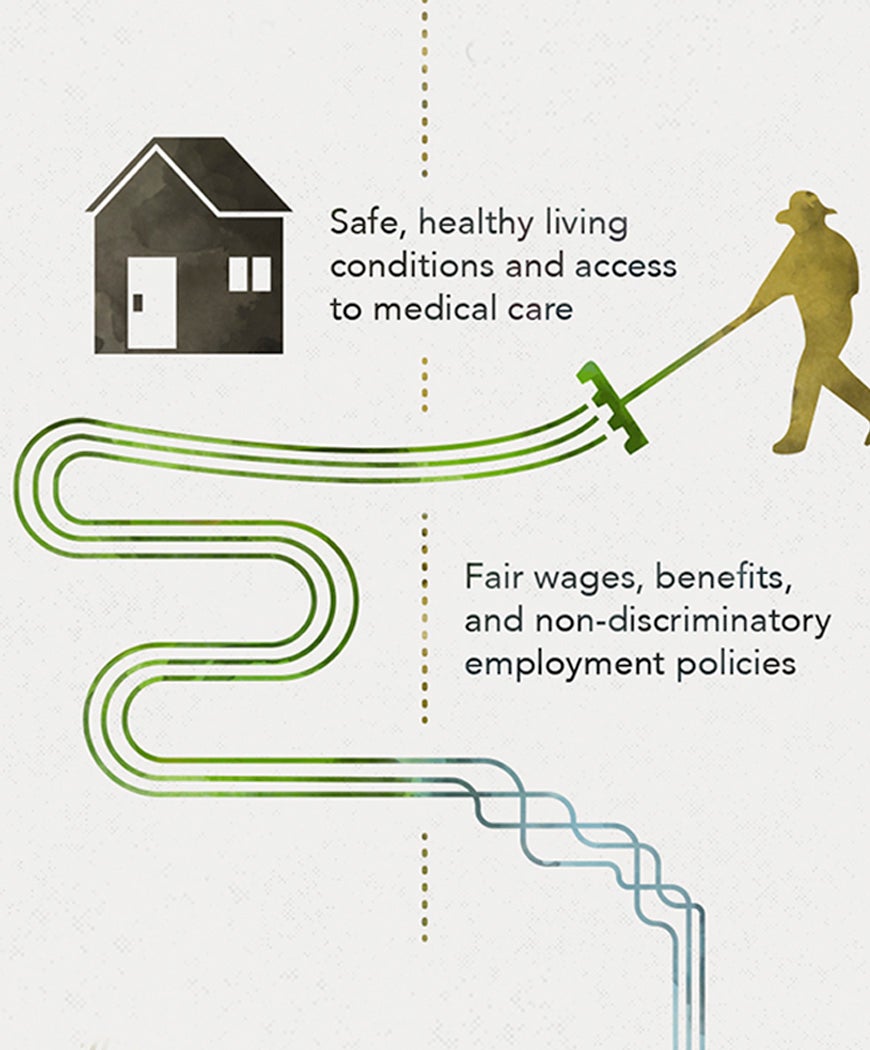 Environmental concerns such as soil care and deforestation, water use and conservation, energy, wildlife preservation and agrochemical use falls under the Planet division.

And Product emphasizes both “cup quality” —  essentially taste — and the economics of coffee-growing to make sure that farmers are being paid fairly.

While there are various other socially responsible designations for coffee growers, C.A.F.E. Practices is a comprehensive program that not only sets minimum expectations of its suppliers but promotes continuous improvement through best practices in sustainable coffee production. The program also enables Starbucks to gain insight into the challenges faced by farmers in different coffee-producing regions. That enables Starbucks to customize its support for farmers, whether that means financial assistance from the Global Farmer Fund through a loan, providing healthy coffee trees or technical support through a Farmer Support Center. In turn, that fine-tuning results in enhanced coffee yields. “We expect supply chains to continue to improve over time, and we offer the support and tools for them to do so,” said Goodejohn.

Farmer Support Centers (FSC) are one of the key ways that Starbucks encourages continuous improvement and production of high-quality coffee, even for those farmers who are not yet C.A.F.E. Practices-verified.

That was the experience of Aime Gahizi, who co-owns Gitesi Farm in the western Karongi district of Rwanda with his father. Gahizi was the first farmer to knock on the door of Starbucks Farmer Support Center in Rwanda when it opened in 2009. His father had taken over the farm after his extended family was killed during the 1994 genocide against the minority Tutsi.

Gahizi’s aunt was the only survivor. Before her death several years after the genocide, she beseeched Alex Gahizi, Aime’s father, to stay put. “This is home,” she said of their ancestral land, with its verdant rolling hills and terraced slopes.

But neither Gahizi, 37, nor his father knew much about growing coffee. They had purchased a small washing station to process their coffee cherries, which contain the coffee beans, but they didn’t know how to properly operate the machinery. They ended up breaking the inner beans instead of just removing the parchment, or outer skin.

“We worked with him to teach him farm best practices and increase productivity and quality control,” said Julianne Kayonga, regional manager of the FSC in Rwanda. “We showed him that quality begins on the farm.”

For eight years, the specialists at the FSC worked with Gahizi as he pursued C.A.F.E. Practices status, which he recently attained. He learned how to protect his 15,000 coffee trees from disease and how to properly handle wastewater from coffee production, as well as how to deploy worms that Starbucks provided to make fertilizer using the byproducts from processing the coffee instead of relying on chemicals. “We have learned how to treat our coffee better,” said Gahizi. “Now we are competitive in the market.”

That’s the goal, said Goodejohn. “We’re willing to invest the time to support farmers who want to learn and become better at growing coffee,” she said. “At Starbucks, it’s one of our core missions and values to support producers growing coffee in the most sustainable way. As a business, we are growing. We continue to look for the highest quality coffee grown in the most sustainable way. We can’t assume it’s going to be there tomorrow, so we make the investment today.”

Getting the C.A.F.E. Practices green light is a lengthy process; quality and transparency are the initial two criteria. A supply chain that wants to sell to Starbucks starts by sending a coffee sample to a discerning “tasting team” in Switzerland. Supply chains whose coffee meets quality standards must provide extensive documentation and receipts showing how the price Starbucks pays gets to the farmer. And they have to meet the “People and Planet” social and environmental expectations.

Third-party inspection agencies, overseen by SCS Global Services, conduct the C.A.F.E. Practices audits of supply chains seeking approval under the program, visiting a proportion of the farms within a particular supply chain. Inspectors are paid to be picky: Are water sources being protected? Is there adequate biodiversity? Are pest management methods appropriate?

Inspectors interview workers, asking how much and how often they’re paid and what their living quarters look like. At coffee mills, inspectors make sure that water used to wash and depulp cherries is treated before being released back into the environment. 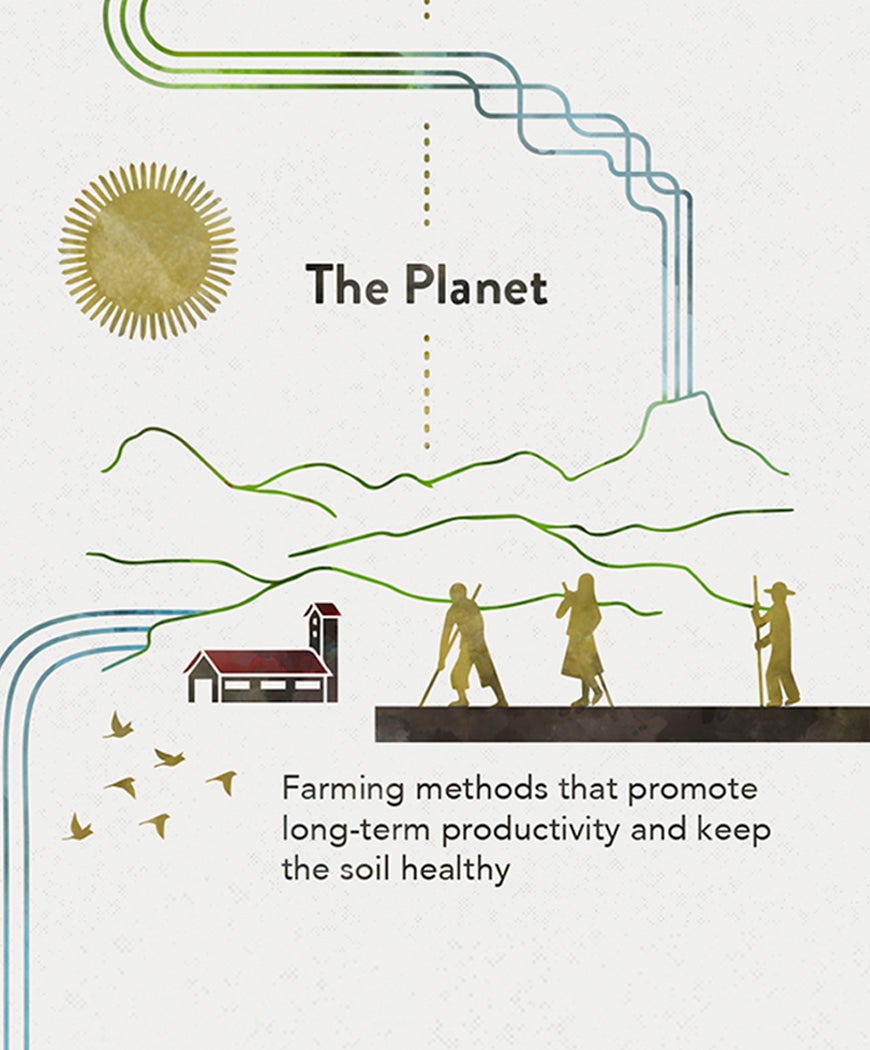 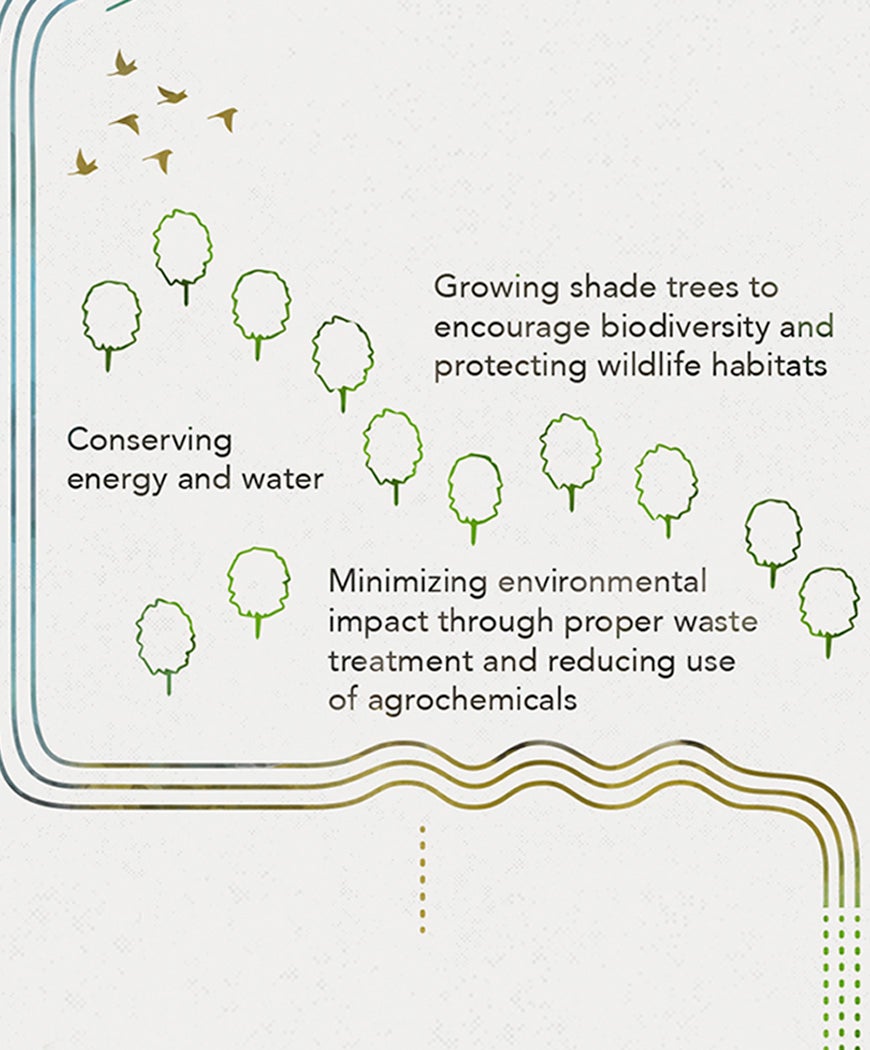 All this data and more is fed into a computer program, which generates a report and score that determines whether C.A.F.E. Practices status is awarded. Verification is not a one-time deal; supply chains must go through the process every one to four years, depending upon how high they score each time.

The copious amounts of data are also used to guide Starbucks’ support efforts. In Mexico, for example, reports revealed low yields. Trees were not producing as many cherries as expected, so Starbucks established a Farmer Support Center to assist with technical training and donated millions of coffee trees to producers who were impacted by the recent Coffee Leaf Rust (Roja) fungus outbreak.  In Indonesia, the Starbucks Foundation is supporting the building of clean water systems — 50 to date — so women and girls in coffee farming communities don’t need to walk miles for water.

And in North Sumatra, Farmer Support Center agronomists work with smallholder farmers to improve coffee yields through soil sampling and application of fertilizer, as well as continuous training on pruning and renovation.

Throughout, Starbucks gets support from Conservation International (CI) to ensure that it’s addressing a broad range of concerns. Starbucks might seek CI’s input about trends in shade canopy — maintaining shade trees in coffee fields. Or it might ask in which regions CI is seeing deforestation.

“C.A.F.E. Practices started from a social mindset, and it moved from there to incorporate sustainability goals,” said Bambi Semroc, who oversees corporate partnerships for CI’s global coffee programs. “Starbucks was progressive in terms of taking the standards and principles of sustainability and turning that into principles for good practices.”

Find the Perfect Coffee for You